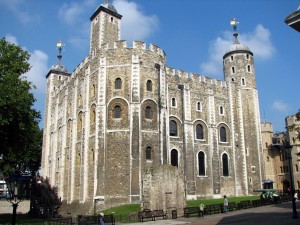 The White Tower was built by William the Conqueror, England’s first king.

Construction of the Tower of London began in 1078 and the first building was the White Tower. It was built by William the Conqueror to secure his latest conquest. He was the last person who was able to take over England. Many have attempted it since then, such as Napoleon and Hitler, but without success. The British Empire has been safe from invaders for almost a millennium, and is symbolized by the still-standing Tower.

The White Tower is a castle-like building with four towers in the middle of the Tower area: “a castle within a castle.” It was not only the king’s residence, but also the last line of defense against possible invaders. Although many modifications have been made by several rulers, the White Tower has mostly kept its appearance. The biggest external change was the enlargement of the windows in the 18th century.

The White Tower has not been restored to be the king’s palace, but instead its interior functions as an exhibition space. Several of its rooms display artifacts and weapons from different eras.

One Response to White Tower