Ravens have always been living in the Tower of London. There are always at least six of them and they are well pampered.  According to the legend, the kingdom will fall, if the ravens desert the castle. There have been many close calls, most recently during World War II when London bombings upset ravens’ peace of mind and most of them died. The only raven to survive the German attempt to overthrow the kingdom was Grip (Raven Grip). The kingdom was but one raven from falling! 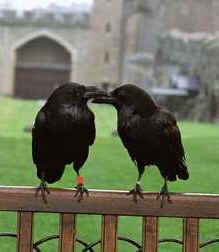 Two ravens having a chat on the Tower grounds.

Survival of the kingdom is nowadays on more secure grounds as the tips of ravens’ wings have been cut and they cannot fly.  The procedure is done by the Ravenmaster.  Besides that, the ravens are guarded and well-fed. There are naturally spare ravens ready to replace the ones that may fall on duty in the British Empire’s last line of defense.

On the other hand, one could consider the ravens as the last prisoners of the Tower.  Despite having their wings tampered, several have tried to flee and some have even managed to do so. In 1981, Raven Grog fled after 21 years of imprisonment. It was last spotted nearby a pub called Rose and Punchbowl.

The oldest raven ever was Raven Jim Crow. It died at the age of 44, which is an incredible achievement for a bird.

One Response to Ravens