During the first decades of the Christian era, the Romans built the first bridge over the river. That first bridge was of light pontoon type, which was rather quickly replaced with a sturdier one. The new bridge rested on large pillars and it remained in use for some time after Roman rule.

After the Roman reign, there was a lengthy period when no bridge existed. During the early Middle Ages, London Bridge was rebuilt several times. Once it was destroyed by a tornado and the last wooden bridge was burnt to ashes in the fire of 1136. Construction of new stone bridge began fifty years after the fire, after various incidents. It was finished by 1209. 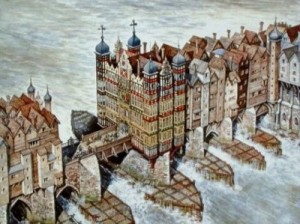 New medieval stone bridge was an engineering masterpiece of its time.  It was not just any bridge leading over a river.  It was the only bridge over the River Thames and therefore strategically important location. London Bridge was also built in a manner that allowed it to control all traffic on the Thames. The bridge has 19 low arches, which did not allow tall vessels to pass. A drawbridge with watchtowers gave complete control over the river and any traffic along the bridge.

In medieval times, the bridge was London’s commercial center. Even seven-storey buildings existed on the bridge and it was more a miniature city. 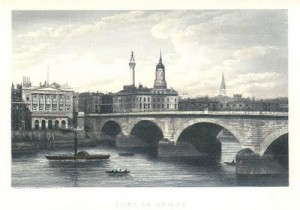 London Bridge had to be demolished after it had been in use for over 600 years. It was too narrow for rapidly industrializing Britain and it blocked the traffic on the Thames. Also, its military importance had vanished since the bridge had been designed about two centuries before first firearms were adopted.

In 1831, a new, wider and more modern bridge was opened. It served till 1960s when it was sold and the new owners shipped it to Arizona and reconstructed there. It still stands and is one of Arizona’s main attractions. 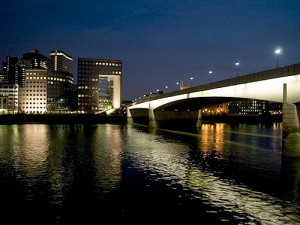 The modern London Bridge opened by Queen Elizabeth II in 1973. At that time, there were already several bridges on the river. It does not look as decorative and elaborate as many other bridges of the Thames, such as Westminster Bridge or Tower Bridge. It is a reflection of its own time and has been built to last and be used for a long time to come, as were its predecessors. The current London Bridge is thus the last link in the 2000 years long chain of London Bridges. “London Bridge is falling down” may have been written for a reason, but the Bridge has always been rebuilt!