The Crown Jewels of the United Kingdom are on display in London, and specifically at the Tower of London. The gems alone are a reason good enough to travel to Britain and to visit the Tower.

The Crown Jewels are kept in a building called the Jewels House. Since it is part of the Tower complex, and all the buildings in the area can be visited with the same ticket, it has no separate entrance fee.

In Jewel House you will receive a special hearing device that performs the role of a guide.  You can walk around the Jewel House in a more or less controlled manner. You will pass by the Crown Jewels on a slowly moving pavement (as on some airports). That has proven an excellent solution, since no-one can stay in front of a single treasure for a long time and all visitors get to have a peek.

The Crown Jewels include several crowns, scepters and swords. And those spherical objects called orbs. 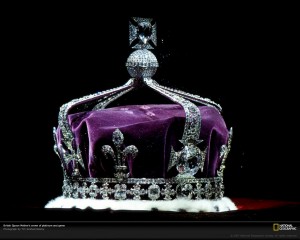 Hundreds of diamonds and other precious stones were used to make the crowns and scepters. Cullinan I, which was the world’s largest polished diamond, is attached to the St.Edward’s Sceptre or Sovereign’s Sceptre with Cross. Cullinan I is the largest of 9 pieces that were cut from a diamond known in some countries as the Star of Africa. Also Cullinan II, which is the world’s fourth largest polished diamond, belongs to the Crown Jewels and adorns the Imperial State Crown.

The most famous diamond is perhaps the Koh-i-Noor. When it was found in India, it was the world’s largest diamond. Name Koh-i-Noor is Persian and literally means “mountain of light”. Both India and Pakistan have taken turns in demanding the diamond be returned where it came from. The British have bluntly replied that if they yield to one demand, soon the whole British Museum shall be empty. One could reply in return, that the British Museum has such a central location that one could think of several splendid uses for it…