London is a huge metropolis in size and its traffic reflects that fact. The city center is hopelessly congested, especially on weekday mornings and afternoons. Getting around by taxi or bus is slow, and even walking is difficult at times. Distances are long in the center, and getting from one destination to another by foot may take hours.

London’s public transport has a long history. World’s first, and thus the oldest, underground celebrates its 150th anniversary in 2013. Even before that, public transportation in London had been through many stages of development.

This page introduces three modes of transportation (underground, taxi and bus), each of them is amongst the most famous in the world for its kind. The underground or “the Tube” is the world’s oldest, London taxis or “cabs” are known around the globe both as a concept and as a car make, and the red double-decker buses are the very symbol of London.

London Underground is the widest European underground system with over 400 kilometers of track. Almost one billion travellers use the underground each year. Various travel cards make getting around by the Tube simple, easy and cheap. You can choose between Travelcard and Oystercard, depending on when and where you plan to travel. Basically we are talking about the same card, where money (Oyster) or travel (Travelcard) is loaded. Read more…

In London, a taxi is called a Cab. The name has its origins in 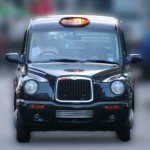 two-wheeled horse-drawn carriages used earlier for the same purpose that were called  cabriolet.

London taxi operations are perhaps the world’s most strictly regulated. The car features are so specifically defined, that it equals to a car make of its own. The drivers’ knowledge of the city is also secured with demanding tests. Thanks to that, passenger can rest assured that he or she will reach the destination in good hands. This is one example of how seriously customer service is taken in Britain. Read more about the London cab …

Double-decker bus is London’s icon. And of course in colour red. A double-decker provides great advantage in the narrow streets of congested London as one bus doubles the number of passengers onboard.

The average tourist normally meets a double-decker on a sightseeing tour. The buses for that specific use are often somewhat different, as some buses may be open-topped. That’s a great thing for taking photos, and a bad thing if it happens to rain. And it rains often. Read more about the London buses …

One Response to Getting around