Getting to the Tower and Tickets

This chapter explains how you can get to the Tower and where you should buy your ticket. 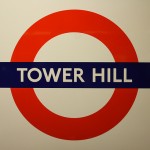 The best way to reach the Tower area is by the London Underground. The closest station is called Tower Hill, and it’s served both by the orange Central line and the green District line. There is also access from the east with the DLR (The Docklands Light Railway) train and in that case your final stop is Tower Gateway. It’s located a couple of hundred meters from Tower Hill underground station. You can naturally reach the Tower also by taxi and a combination of train and underground, should you be arriving from far. Or, you can also get there by riverboat or River Bus, in which case you have to get off at Tower Pier. You cannot miss it, as it’s located next to the Tower.

Below you can see a part of the London underground map. The closest station to the Tower is circled with red. Tower Hill station is the upper white “ball”, whilst the lower one is the DLR’s Tower Gateway station. 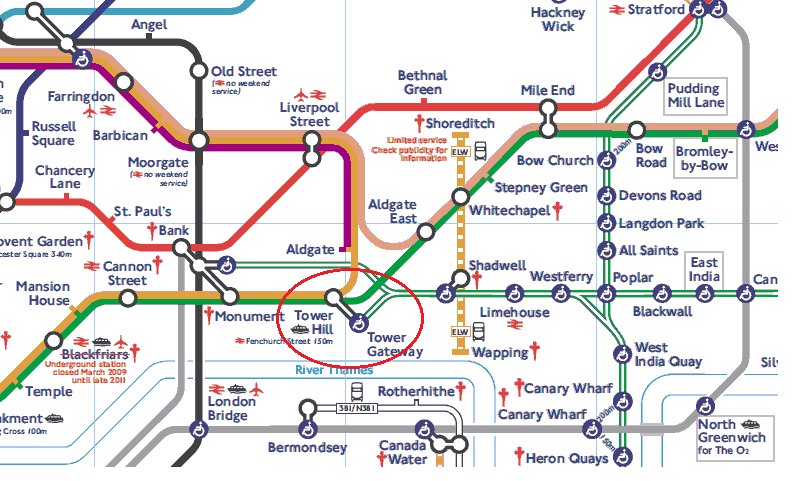 The Tower of London is just a short walk from the station. Navigation couldn’t be easier as the Tower can be seen from afar.

You can purchase admission tickets to the Tower from various tourist kiosks, one of which is located along your way from the station towards the castle. You can also buy your ticket from the official Tower kiosks in front of the castle. The waiting period is usually reasonable. The adult ticket costs £21.45 or £20.35, if booked online (in 2013). Students and citizens over 60 are entitled to a small discount, provided they can present a photo ID. Children under the age of 5 get free admission, and between 5 and 16 years pay £10.75 for their ticket. Family ticket comes with a cost of £57.20, and grants admission to two adults and three children. So, if you don’t have enough children, take your neighbour’s kids along!

Tickets are inspected at the castle bridge, which is the only point of entry and exit. There is no point in trying to sneak in without a ticket, as the Tower is also surrounded by high walls and a wide moat. Prepare to have your bag examined before entry, purely for security reasons. You’ll be allowed to keep your drinks and you may even carry a nail file, unlike on the plane.